Happy New Year and
Welcome to a Bright 2016

Vancouver’s real estate market continued to be one of the most talked about topics in 2015. The federal election, raising the minimum down payment required, property assessment increases and just how foreign investors are impacting Vancouver housing market provided no end to areas of discussion.

Vancouver Westside’s Active Listings were down 30% from one year ago in December and also were down 25% from just the previous month of November, 2015.  As previously mentioned, December is traditionally a slower real estate month but that did not hamper the 13% increase of Units Sold Year to Date.  1782 units were sold as of December 2014 and 2031 were sold as of December 2015.  The Average Price per unit for Vancouver West was $3,336,869 which was surprisingly up a mere 2% from one year ago which sat at $3,242,879.

With sales to active listings ratio of above 25% in most of the local markets, much of the year was undoubtedly identified as a sellers’ market. The total number of homes listed for sale in 2015 ranked fifth in the last ten years, while the MLS Home Price Index (HPI) saw double-digit year-over-year value increases.  Every indication keeps pointing us to a strong market in 2016. The Market Overview below is a more detailed understanding on just how North Vancouver, West Vancouver and Vancouver Westside have been doing.

Have a look and if you are interested in buying or selling your home, I’d love to help. 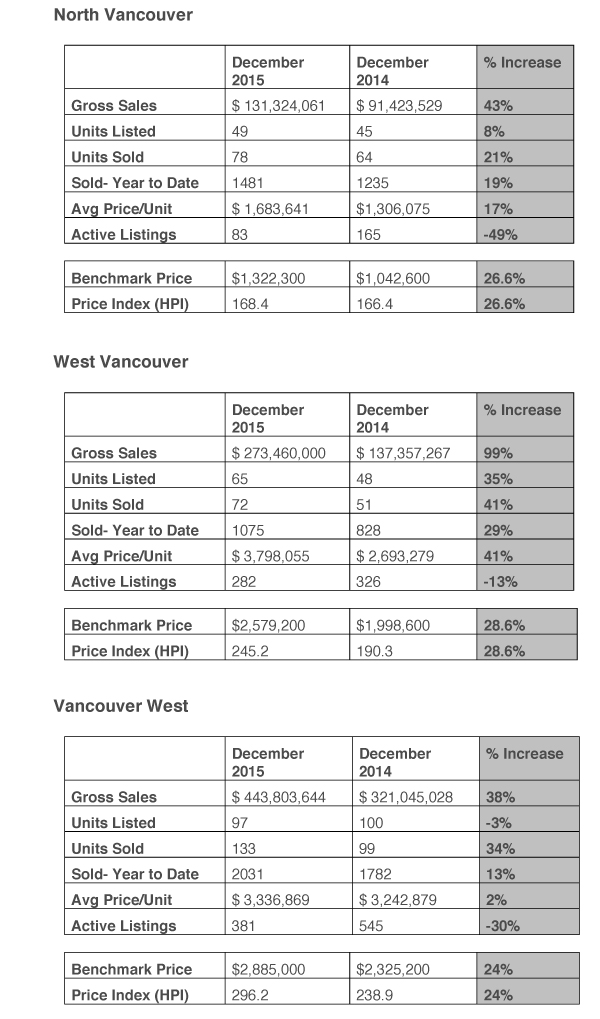 This entry was posted on January 18th, 2016 | Posted in Market Stats